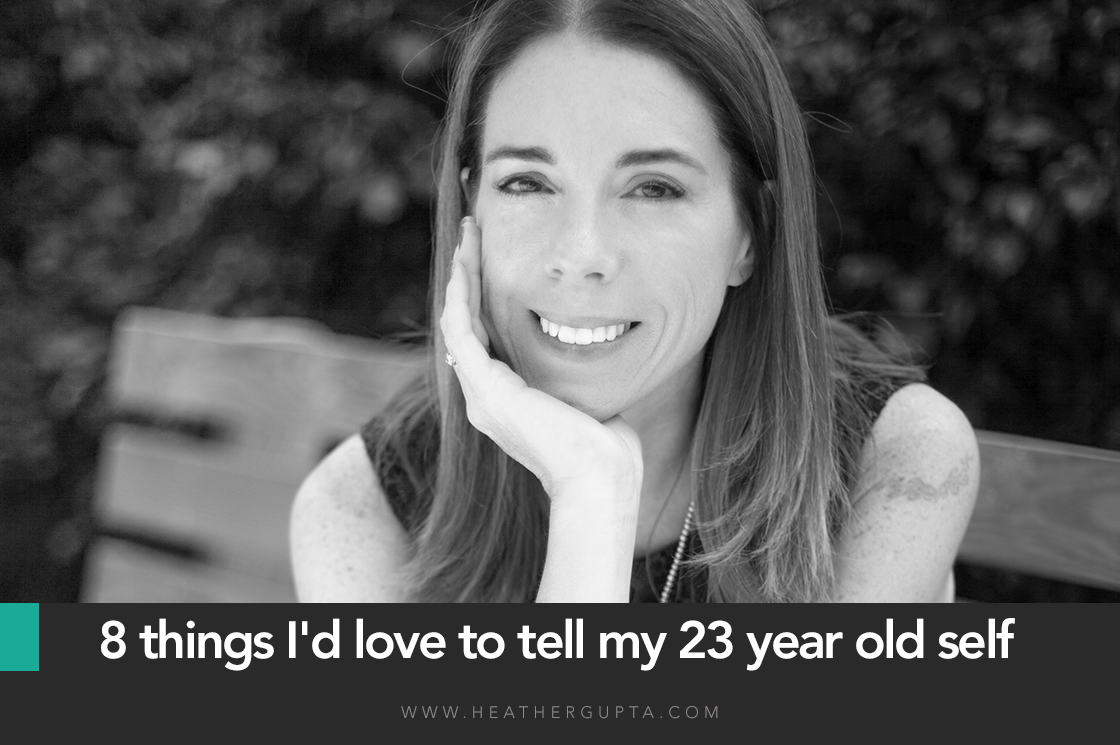 Over half my life ago, I was preparing to start my first ever “proper” job. Granted, I’d been working for 10 years already, since picking up my first job washing dishes in a hotel when I was 13, but this was The Big One. A prestigious Graduate Trainee marketing job with a large multinational company, working on a brand that everyone had heard of (and most had used). I really thought I’d arrived in life.

Fast forward a quarter of a century, and I realize that although I thought I knew it all back then, I actually knew very little.
Here are 8 things I’d love to tell my 23 year old self :

I know you’re super competitive, but trust me, you’ll mellow with age. Why are you so hard on yourself, and so aggressive? That big fat marketing job you’ve just landed, straight out of college, will actually turn out to be a disaster. You’ll hate it, and you’ll end up doing something you really love, and doing it really well, in a hotshot London advertising agency (and eventually, all over the world).

2. Enjoy being the youngest

Right now you’re at the bottom of the pile. I know you think it sucks that you end up being the “dogsbody”, and you hate being given all those menial jobs that no-one else wants to do. It feels like your boss, who is only a couple of years older than you, gets a kick out of delegating all her crap to you. But you know what? Eventually you will reach the top, and trust me, you’ll miss feeling like the rising young star!

You’re only 23 and you’re already planning the rest of your career. You’re in such a hurry to get those promotions and payrises, but here’s what’s going to happen as a result. You’ll be in so much of a rush to get there in your 20’s that you’ll hit 30 and be burned out. That’s when you’ll decide to backpack solo around Asia, and once you’ve let go and started “finding yourself”, as they say, you’ll be offered an amazing job heading a regional team in Bangkok!

4. Don’t stress about finding “the one”

You’re not particularly bothered about marriage, but you are a little bit obsessed with boyfriends, and being in a relationship. I have good news for you. You will (eventually) find your Mr Right, just as you’ve given up hope. You’ll also have 2 kids by the way, incredible as that sounds, because you’re absolutely determined right now to remain child-free. They’ll be amazing, they’ll open you up to a whole new kind of love, and you’ll have them after you’re 40 so you have loads of time to do everything and more.

5. Get on the property ladder as early as you can

You know that flat you’re renting in a shabby but up and coming area of London? Buy it. Don’t wait until you’re 33 to buy a place. I know you don’t have money, but you’ll find that the banks are particularly generous to first time buyers (this will change!!) and you can borrow all you need to. That flat will increase in value like crazy. Once it does that, buy another one … and keep going.

6. Enjoy all your spare time

Your teenage years, characterized by “being bored”, are not so far behind you, and you do occasionally find that you have too much time on your hands. You know what? One day, all of that excess time is going to be disappear into a vacuum of work, marriage and kids, so suck the marrow out of every moment now. Read like a maniac, listen to music, write that book which you’re dreaming about writing, go visit your friends up and down the country, take up a few hobbies and just enjoy the feeling of being completely and utterly self-centred.

You’ve just come out of one office romance. It was your first, and thankfully it will be your last. Thankfully you’ve learned your lesson the hard way, and early on, before things got complicated. There are many fish in the sea, there’s no need to fish from the office pool. And while I’m at it, that includes avoiding snogging co-workers at Christmas parties. Just saying.

Right now, the cloud is something fluffy and white in the sky, and the internet has barely been invented. Your photos are developed at the chemist, and you keep them in albums. Over the coming 20 years, technology will go crazy. That floppy disk? It will soon be redundant, but it’s better than nothing right now. Those CD roms? Save photos onto them. Eventually pen drives will come along, and then the cloud makes everything easy but you’re going to lose a laptop and a few phones before that happens. Trust me, you’ll thank me when you’ve backed up your phone numbers, photos and documents.